The Great Chicago Fire Festival: Fizzle on the River 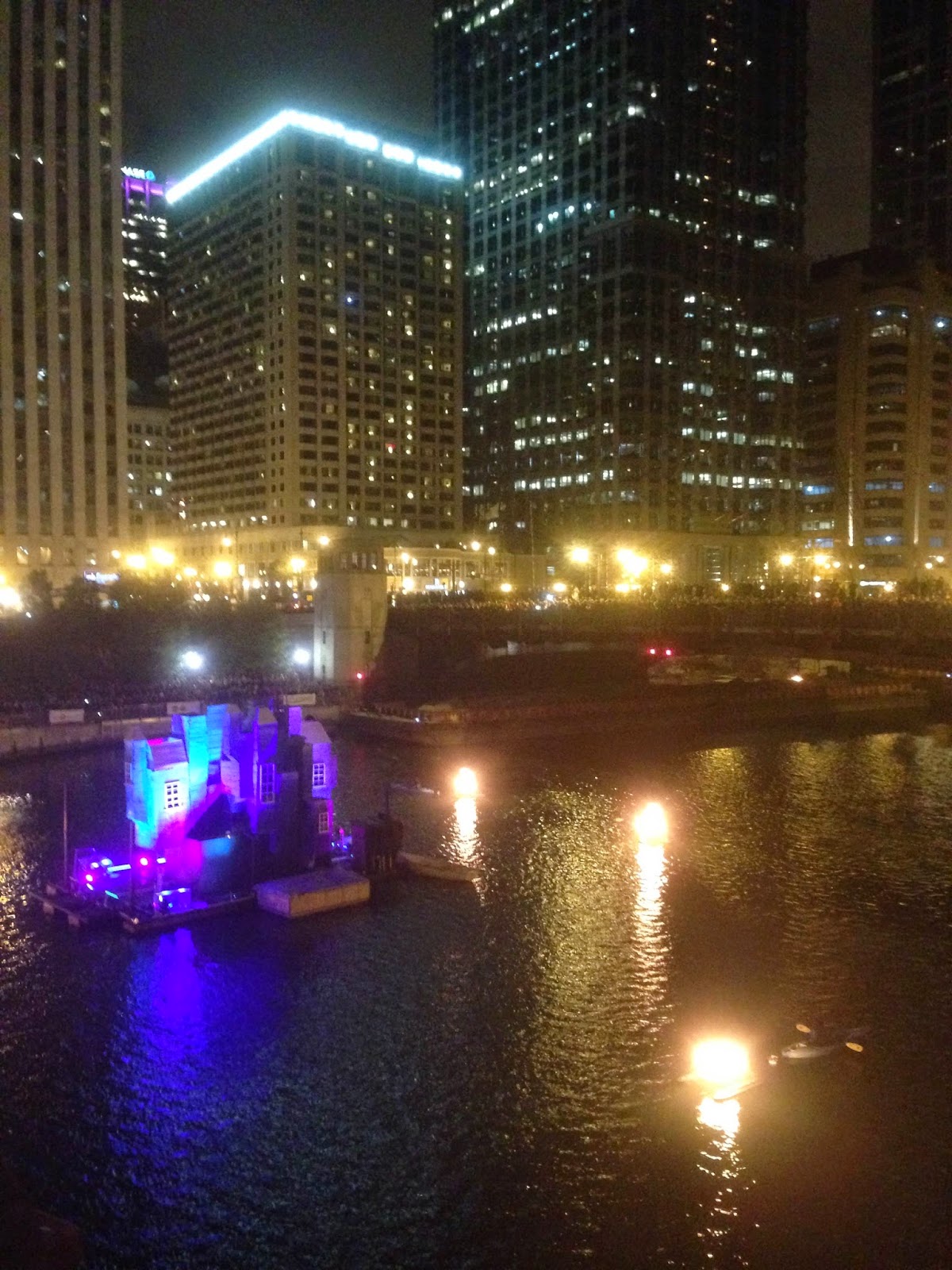 As you’ve heard by now, the inaugural Great Chicago Fire Festival ended up being anti-climactic.  It was the best-attended portion of the festival (whose day-time festivities included crafts, food trucks and several small performances), but in basic terms, the crowds really came out to see stuff get lit up. Who wouldn’t love a pyro parade!  Thousands (me, more importantly) braved the cold Saturday night to catch a glimpse of an inferno on the river.  That spark never caught on, due to electrical problems, the precipitation that week, etc.  You’ve already read all about that, I’m sure, so you’ve probably also seen the backlash about the night being an epic flop.  But, I am writing to defend the Festival, despite all of the glitches.


The parade started off on the right foot.  Stage lighting cast different colors upon the 1800-style house floats, in anticipation of the flames they was supposed to have been lit up with later.  Rob Stafford emceed the symbolic lighting of the neighborhood cauldrons, which were then trailed down the river for all to see.  A steamship-inspired boat floated down and puffed some preliminary flames for the crowds (which ultimately seemed more Halloween-appropriate, given the creepy slow effect, clown-like appearance and accompanying Danny Elfman-sounding music).  Then, the cool part:  the Chicago Children’s Choir performed, perched atop an architecture tour boat.  Having been stationed on Wabash facing westward, I was fortunate enough to witness the opening to this chorus.  It makes for a great clip on our Facebook page!

But from that point on, the flames were supposed to take over, and…nothing happened.  For about 35 minutes, nothing happened.  Just a bunch of folks standing around in the cold waiting to see something while (unfortunately) that creepy Danny Elfman-like song played for a long while (too long).  Eventually Rob Stafford came on to announce the technical difficulties, and eventually the technicians conjured some measly flames on the float that was nearest Wabash.  But the inferno was not to be.   So, lights, cameras, and no action, really, until they ended with the fireworks.

So, yes, ultimately it was a little disappointing to have the pyrotechnics fizzle.  But there is still a bright side to this whole event.  Note that the weather this evening was pretty cold, still damp, and a little windy.  And yet, many people still came.  Mostly everyone stuck around until the bitter end, despite the wait time and soggy parade floats.  People still enjoyed their hot chocolates, still got their Instagram pictures (guilty), still got to be outdoors amid the bright lights in spite of the depressing weather forecast and looming winter season.  Don’t think that people still didn’t enjoy the evening.  The Festival has plenty of potential to expand upon next year if it is (hopefully) held again—with better organization and more flammable parade floats the spectacle could really take off.  We Chicagoans are already familiar with looking forward to ‘next year’ for a better performance.  What’s another festival to add to the list of sports teams, right?


-Jessica
Posted by Museum Explorer at 11:26 AM