Today is truly a banner day for Museum Explorer!  Yes, we've had many of those lately, having just come back from a successful trip to the Smithsonian Museum... but today is all the more special because it marks 10 YEARS of Museum Explorer!!  In an article Rich wrote for Museum Magazine, "How Will Museums Label the Future?" (around the time when we started the company), he suggested as an answer to the titular question that "experimentation might lead to surprising results."  TEN years ago today, we started this company to make that happen, and about a week ago today, we presented one of our carts to the Smithsonian Affiliates at the Smithsonian Museum...

In celebration of our anniversary, we wanted to share thoughts and well wishes from some of our customers. MANY THANKS to all of you for your support, and to everyone, including our family, friends, colleagues, and clients who have helped us make it to ten years.  Here is to 10 more years of experimentation--and success!! 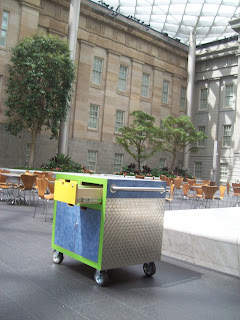 "For the last ten years Rich has developed Museum Explorer with a process of a        continued cycle of improvement. He has gradually added people to complement his skills as he learned more about his clients needs so that Museum Explorer can now offer a wide array of services. The company combines the best of the commercial sector with a deep knowledge of museums."
Peter Crabbe
Director of Exhibitons & Design
DuPage Children's Museum

"I absolutely LOVE working with Museum Explorer.  Over the last 8 years we have worked on many projects together, from very big to very small. The size of the project never matters - Rich and his team bring the highest level of expertise and creative thinking to EVERY SINGLE project. Congratulations on 10 great years!"

The Wheels on the Exhibit (I mean, Bus) Go Round and Round

Exhibit developers and designers are lucky to have the chance to explore intriguing topics. Like reporters on breaking news stories, we get the scoop--sometimes from the discoverers themselves--on intriguing finds: dinosaur fossils, new (non-extinct!) species, artifacts from archaeological digs in exotic places. We get to suggest ways to present cool stuff and amazing ideas to the public. We get to tell museum audiences some thrilling stories.  And sometimes, we get to work on truly spectacular exhibits.

But…what if exhibits just aren’t enough?  What if you could take your exhibits off the walls, and then right out the front door, to the local park, school or shopping mall? Well how about climbing aboard the ultimate exhibit?  ...A BUS!

An exhibit bus is a big idea in a small, movable package.  You can climb aboard and cruise the streets of your community, all while exploring its history inside the bus itself.  An exhibit bus truly makes your community accessible by bundling an exhibit in a space that is not just interesting, but special. It is a unique way of quite literally delivering a message.
Picture installing a special exhibit on a small bus, one that can comfortably accommodate 12 to 14 children at a single time. That is about the same number of people that are able to comfortably crowd around the average exhibit case inside the average museum--but a bus is anything but average.

Next, picture yourself driving that bus around to schools, neighborhood festivals, branch libraries, malls--any type of place where school kids gather. Beep Beep! What a way to announce what you’ve got to offer. This little exhibit rocks because it rolls! And while the bus is only about 20 feet long and 8 feet wide, the exhibits inside cover a lot of ground--130 years of Chicago's growth and change, and delivers a hopeful message about a great person.

This bus, conceptualized specially for the DuSable Museum of African American History in Chicago, has two aisles and eight interactive areas. You can trace the history of Jean Baptiste Pointe DuSable from his arrival in the Chicago region and his establishment of a trading post through his successful years as an entreprenuer, and onward to his legacy as Chicago’s founding citizen and inspirational figure.

Yes, the wheels on the bus go round and round, but when the bus stops and opens its doors for children, parents, teachers and members of the community the wheels inside everyone’s heads start going round and round, too. The DuSable bus includes plenty of stuff to do - flappers, sliders, magnetic poetry, interactive maps, push button audio sources and even a model canoe that you can sit down in and imagine yourself paddling up the Chicago river to your pioneer home and eventually into the history books. It truly is an inspirational experience.
What these features teach about our founder will move visitors. The more people read about du Sable and his achievements, his creativity and his instincts as a frontiersman and entrepreneur, the more people will realize what an amazing person he was.
“Each day, we build on du Sable’s legacy,” as he was an epitome of hard work and innovation--characteristics still in high esteem of we Chicagoans.   As the exhibit points out, du Sable “settled here among native peoples and raised a family,” while also running and growing “a successful business, working with customers from many different places.”   DuSable “earned admiration and respect of people who knew him,” and the exhibit bus will likely make you feel that way, too.

So keep your eyes open for the DuSable Museum Story Bus. It just might come to your neighborhood one of these days. When it does, step inside to see "Jean Baptiste Pointe du Sable: Legend and Legacy." We were inspired by the story of Chicago's founder, and we hope you will be too!

Posted by Museum Explorer at 8:51 AM No comments: