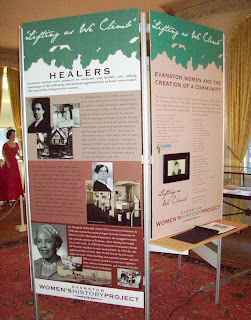 Earlier this month Museum Explorer was recognized as part of a team from the Evanston History Center that won an Award of Excellence for Exhibitions from the Illinois Association of Museums. The award-winning exhibit, "Lifting as We Climb: Evanston Women and the Creation of a Community," presents and celebrates women and women's organizations in Evanston's history. We were grateful to learn that IAM made particular note of the team's "excellent planning process" and the "remarkable record of women's achievement" that the exhibit documents and displays.

We love being recognized for an "excellent planning process." Yet no amount of excellent planning holds water without complete support from the client museum. We were privileged to work closely on this project with EHC archivist Lori Osborne, who served as exhibit curator, and EHC director Eden Pearlman. At the Evanston History Center, Eden Pearlman has created and continues to nurture a collaborative environment that elicits the very best effort each team member has to offer.

Even more important than any planning process is this. In the last 10 years there has been much discussion about how museums need to serve their communities. In our opinion, these communities aren't just neighborhoods, or lines drawn on a map. Instead, community is mapped on the mind--a set of common interests and perspectives. Good museums, like the EHC, help focus interests not just in external content areas like art, science, and history, but also in internal realms such as identity, self-worth, and self-actualization.

Museums serve communities by helping visitors realize goals. Could a new age for museums be at hand, as various political groups, commercial ventures, and cultural bodies begin to see that the act of exhibit development itself can catalyze mutual interest and cooperation? As everyday people learn that exhibits can excite and inspire a local community, exhibit development becomes a tool through which communities can consolidate knowledge, cultural energy, and material wealth to achieve a common agenda.

The Evanston Women's History Project and its exhibit, "Lifting as We Climb," does just that. While the Evanston History Center is a small museum with a tight resources and a small, hardworking staff, they are playing the big game with big success, in ways that great--and greatly endowed--museums can only dream about.

Posted by Museum Explorer at 11:42 AM No comments:

When it all works out 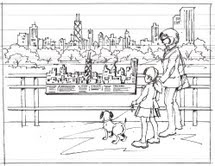 How often do things work out just the way you want them to, with a minimum of fuss and bother? In the museum exhibit business, there's usually no shortage of haggling and hand wringing between the revelation of an idea and the Big Opening. But every once in a while we get lucky.

The new reading rail on the pedestrian bridge overlooking the pond at Cafe Brauer, at Lincoln Park Zoo, is one of those lucky projects. Step 1: A simple idea. People walking across the bridge see the gorgeous Chicago skyline in the background. Let's put a "map" of the skyline right at their fingertips so they know what they're looking at. Step 2: Museum Explorer creates concept drawings.

Step 3: Chicago Architecture Foundation generously shares existing graphics files with the metal fabricator so no one has to re-invent the wheel, i.e., create new scale measurements and drawings for each building. Step 4: The metal fabricator builds the reading rail just the way we drew it. 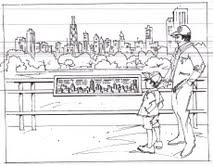 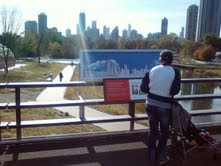 The bridge over the pond is part of the larger Nature Boardwalk project at Lincoln Park Zoo. Catch up on Nature Boardwalk news and see great photos of plants and animals that live there: check out the blog written by Vicky Hunt, the zoo's coordinator of wildlife management. Barbara Brotman of the Chicago Tribune wrote a recent column about Nature Boardwalk; take a look at it here.

Or better yet, hop on the train or the bus and head out to Lincoln Park Zoo, wander around, and see the Nature Boardwalk--and much more--for yourself. Can't beat the admission price: it's free.

Posted by Museum Explorer at 12:05 PM No comments:

As exhibit developers and designers, we're lucky to have the chance to explore intriguing topics. Like reporters on late-breaking stories, we get the scoop--sometimes from the discoverers themselves--on intriguing finds: dinosaur fossils, new (non-extinct!) species, artifacts from archaeological digs in exotic places. We get to suggest ways to present cool stuff and amazing ideas to the public. We get to tell museum audiences some thrilling stories.

And sometimes . . . we get to work on a real hidden treasure.

Something that's not just interesting, but special. A unique way of delivering a message. A gem.

That gem is the Story Bus of Chicago's DuSable Museum of African American History. The DuSable had the idea of putting an exhibit into a small bus, then driving that bus to neighborhood festivals, branch libraries, malls--places where school-aged children gather. This little exhibit rocks because it rolls! And while the bus is only about 20 feet long and 8 feet wide, the exhibit inside covers 130 years of Chicago's growth and change, and delivers a hopeful message about a great person.

The person? Jean Baptiste Pointe du Sable, the founder of Chicago. From the exhibit introduction:

He settled here among native peoples and raised a family. He ran a successful business, working with customers from many different places. He worked hard. He earned admiration and respect from people who knew him.

What we learned about Jean Baptiste Pointe du Sable moved our entire exhibit team. The more we read about du Sable and his achievements, his creativity and his instincts as a frontiersman and entrepreneur, the more we realized what an amazing person he was.

It became clear that du Sable's story carries a powerful and relevant message for people of all ages. During this time of economic uncertainty, we can all be inspired by this man who had a vision, took a risk, and worked hard to make his way in the world. In the words of the exhibit:

Each day, we build on du Sable's legacy

Jean Baptiste Pointe du Sable was the founder of what has become one of the most exciting cities in the world. Chicago has grown by leaps and bounds since du Sable's time, though, and he didn't make that happen by himself.

Chicago has been home to many famous people. But the people who built up this city, brick by brick and block by block, aren't always the ones whose names we know. Or whose autographs we'd love to have.

Du Sable's vision lives in people who work hard. Who see a need and figure out how to fill it. Who see a chance and grab it. Who help their neighbors. Who have a dream, and take a risk to make that dream come true.

Look around. Du Sable's legacy is found in people you meet each and every day. And in people like . . . you.

So keep your eyes open for the DuSable Museum Story Bus. It just might come to your neighborhood one of these days. When it does, step inside to see "Jean Baptiste Pointe du Sable: Legend and Legacy." We were inspired by the story of Chicago's founder. We hope you will be too.
Posted by Museum Explorer at 1:01 PM 1 comment:

Chillin' with the rhinos at Lincoln Park Zoo 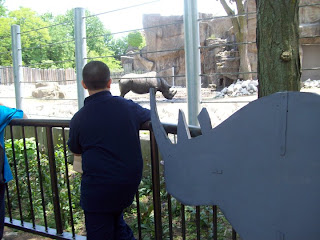 Unless you're a visiting scientist, or working on behalf of science, animal welfare or conservation, it's nearly impossible to get behind the scenes on a summer day at Lincoln Park Zoo.

But every once in a while it pays off to be an exhibit developer. On a recent sweltering afternoon, we at Museum Explorer found ourselves inside an enclosure, gazing face-to-horn with the zoo's two large male rhinos and trying to wrap our brains around rhino ways as we gear up to develop new interactive interpretive signage for LPZ.

We spent almost an hour with the rhinos, some of it literally hands-on, as we got a feel for what they're like. We patted their heads, touched their massive horns (which felt kind of like giant toenails, in case you were wondering) and stroked their immense flanks. Petting those powerful flanks was like rubbing your hand across a hot sidewalk, dense and dry and rough.

During our visit, we learned that rhinos love to munch on bright green golf-ball-sized food pellets that are surely made from some sort of super-concentrated healthful rhinoceros nutrients. After the main course, their keepers let us offer the rhinos handfuls of alfalfa. Those long rhino lips nibbled skillfully around our hands to pluck out the alfalfa stems, more nimbly than our own human fingers could have done it.

And what goes in . . . comes out. In a big way. Amazingly, the rhinos themselves are pretty much odor-free. But their poop is another story. Mostly it's just huge, as in XXXXL. Each rhino drops about four loads a day, at about 20 pounds a plop. Eighty pounds of poop . . . hmmm. It doesn't take a rocket scientist to figure out the interactive for that one! Now we know why zookeepers are in such great shape.

Posted by Museum Explorer at 12:43 PM No comments: