How Lovely Are Your Branches: A Christmas Trip to the Arboretum 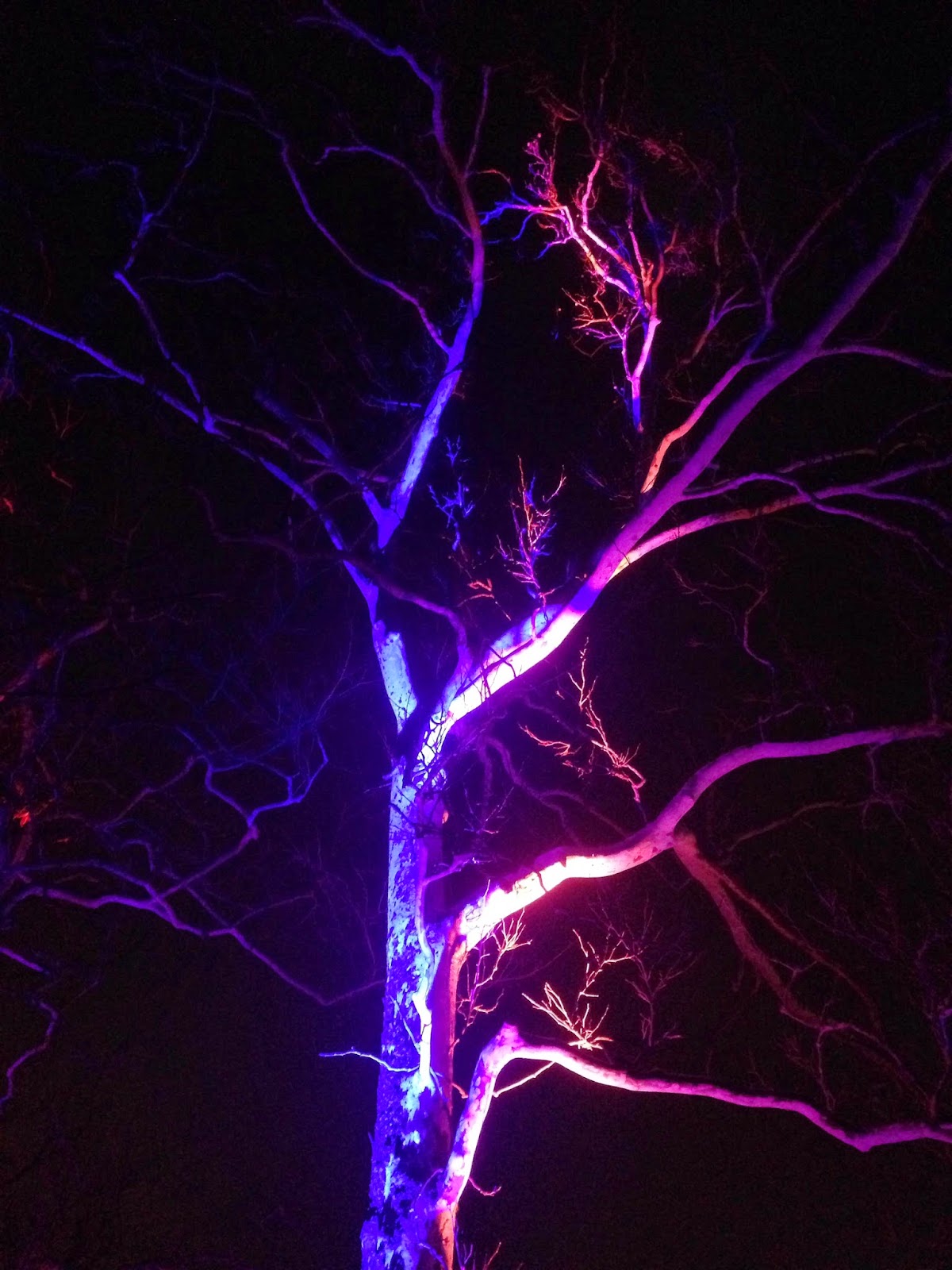 Earlier this week, you may have noticed, we trekked to the Morton Arboretum.  That’s right—it is December, and it was a mere 30° outside, but what a night!  We went to see the “Illumination” exhibit at the Morton Arboretum, a mile-long stretch of trees decked out in all kinds of lights and color. 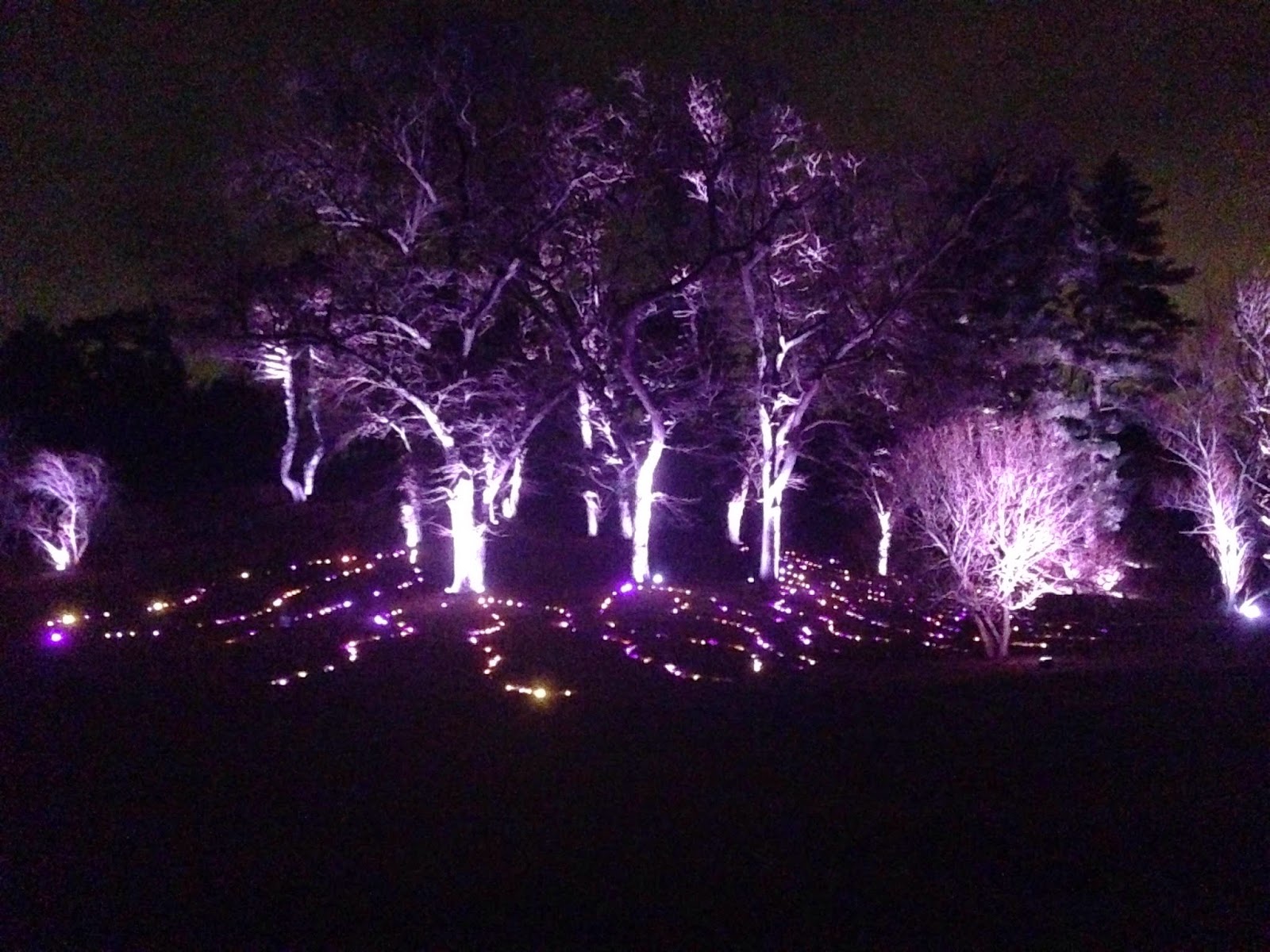 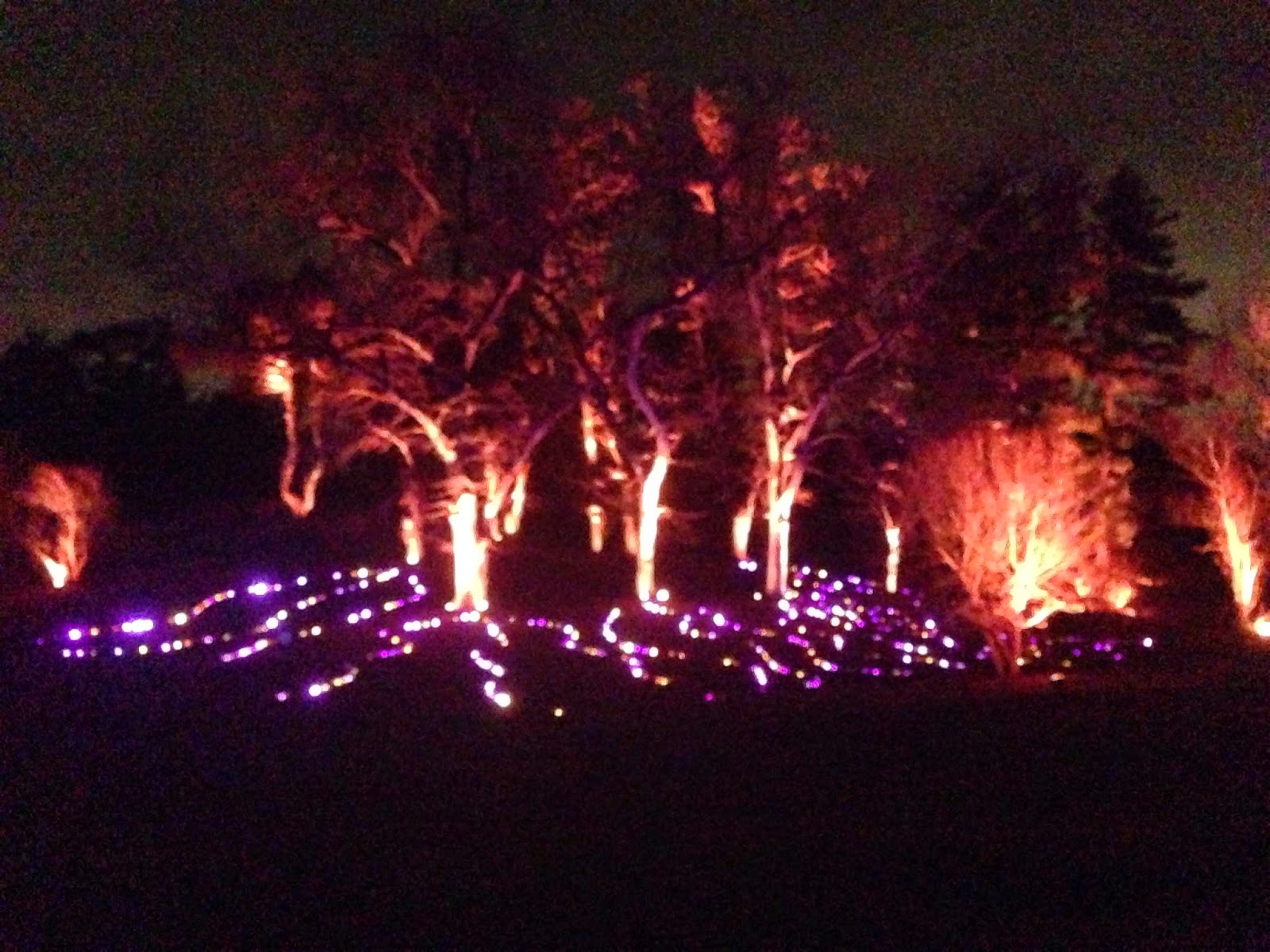 These were not just any Christmas lights!  Although there were plenty of conifer trees on display, the lights shone upon trees and hedges of all sizes and shapes at the Arboretum.  It was literally like walking through the Disney classic “Fantasia,” what with all the incredible colors and the Classical music (from our very own Chicago Symphony Orchestra!) being played from the speakers.  The ‘Symphony Station,’ which you see pictured to the right and above,
was particularly awesome.  This was a new addition to “Illumination” this year, with the lights both on the floor of the forest (!) and those projected on the trees synching up with the Classical music.  Just incredible.

Here are some more photos from our tour of “Illumination,” but try and get to the Morton Arboretum to see for yourself—you only have until January 3rd! 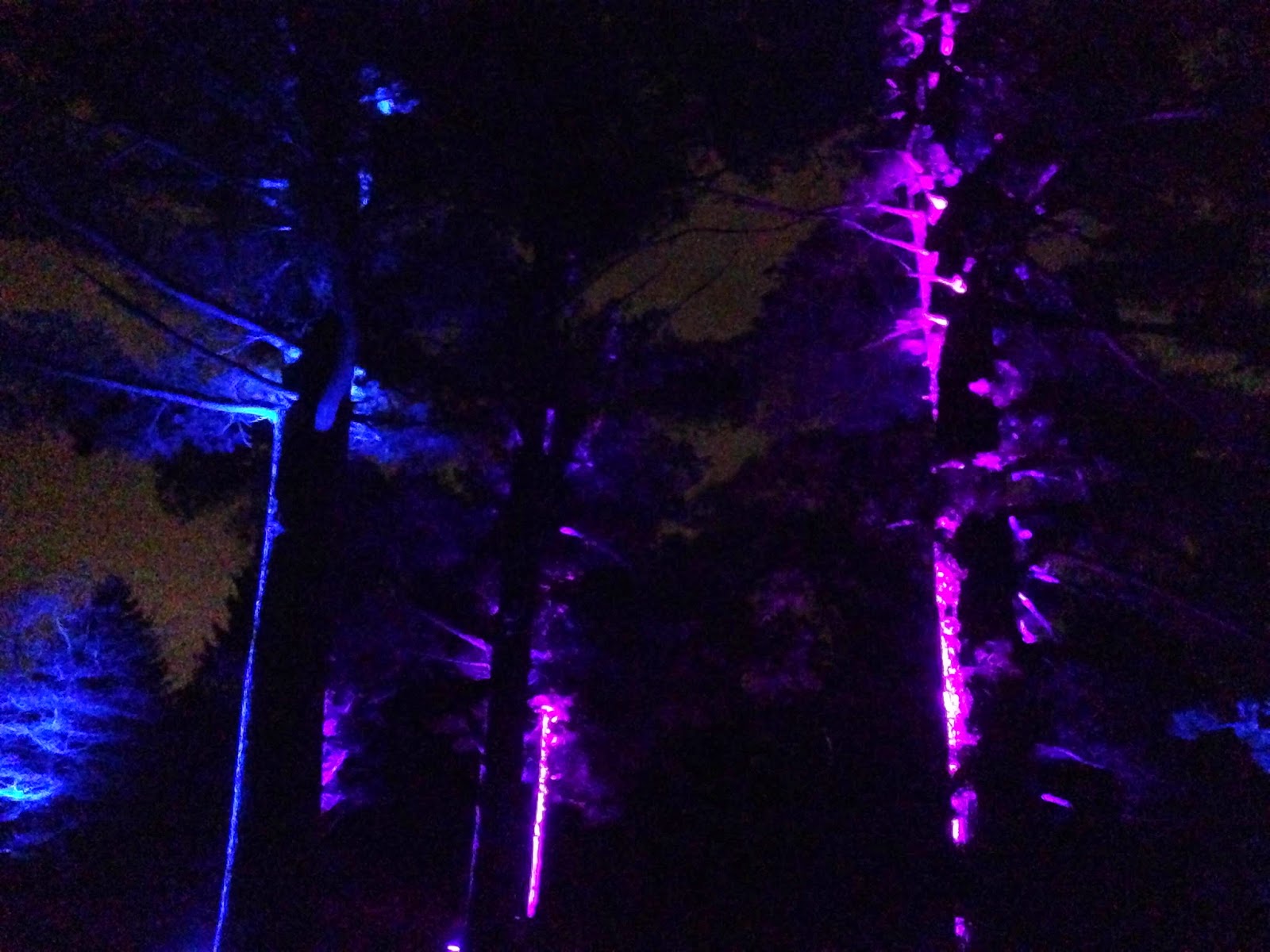 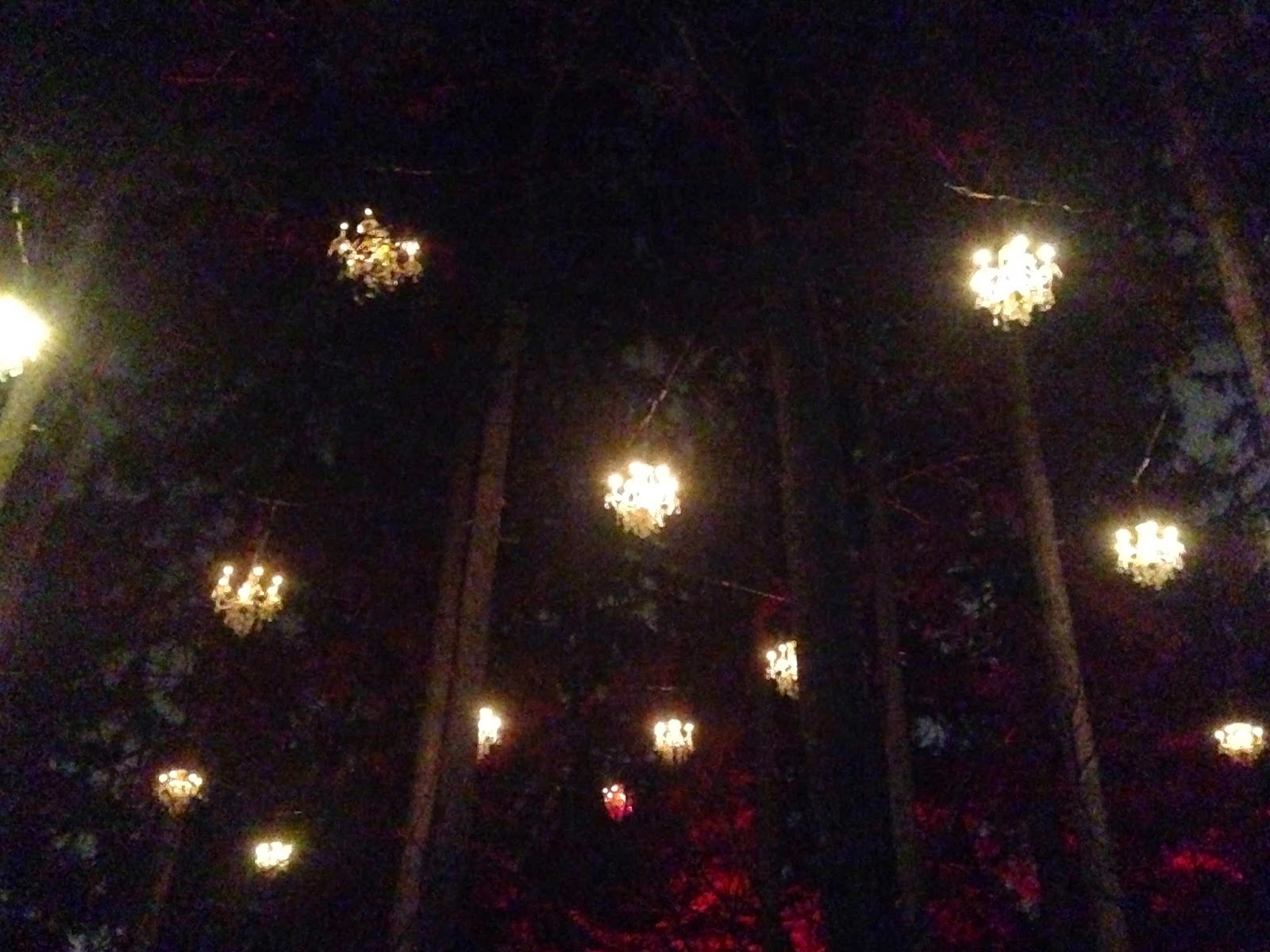 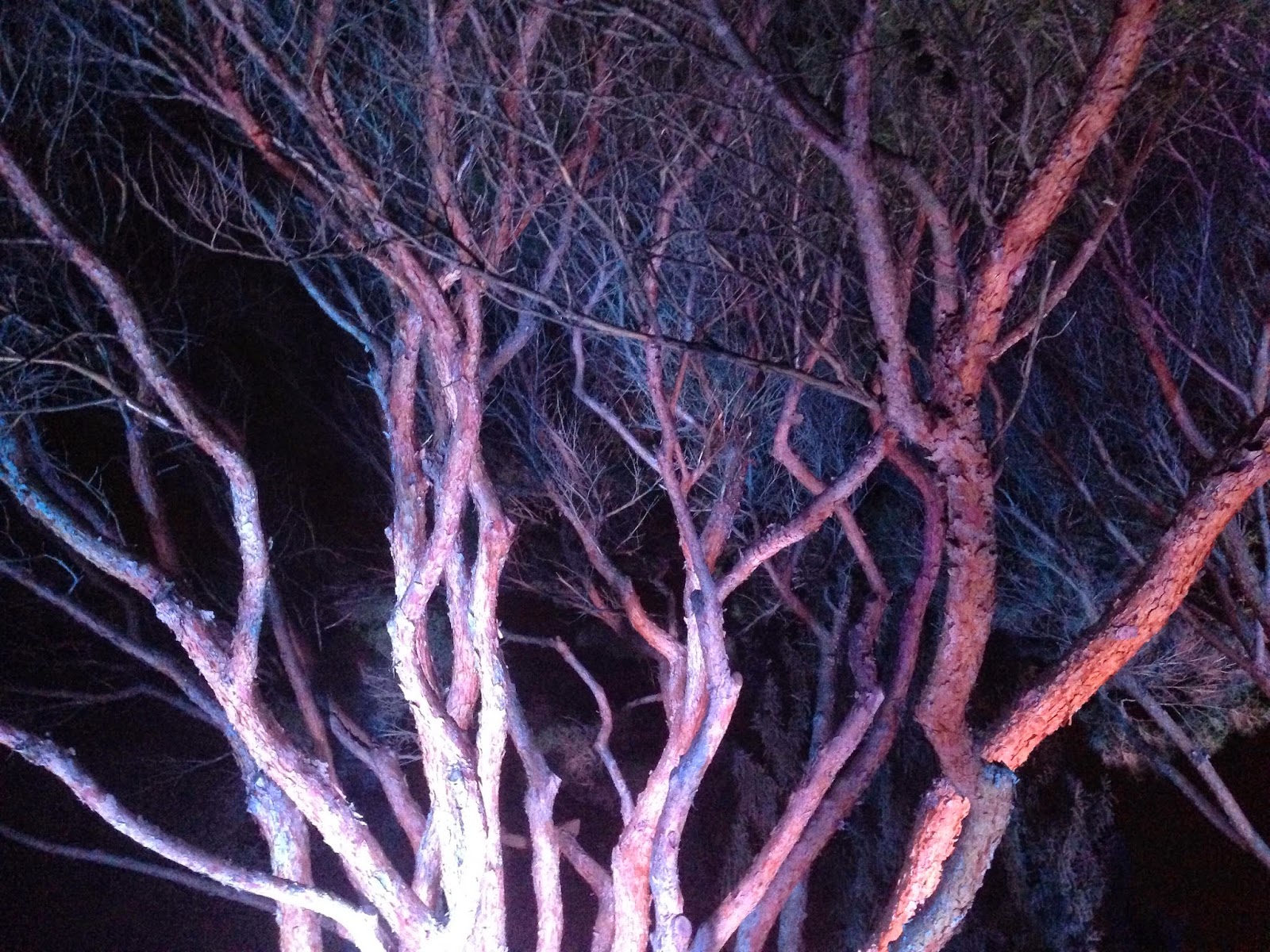 Posted by Museum Explorer at 9:16 AM No comments: 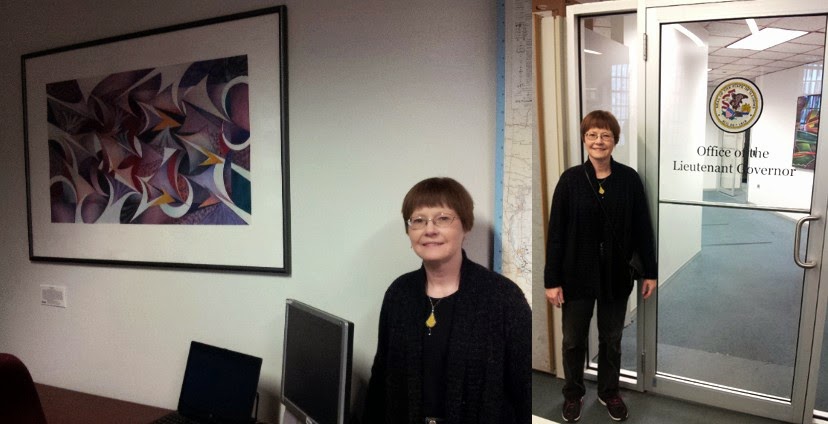 Cheers to MuseumExplorer's very own Gini Kondziolka!  Our Graphic Designer has just had one of her paintings selected to hang in the State Office of the Lieutenant Governer.  Gongrats, Gini!
Posted by Museum Explorer at 10:53 AM No comments:

For me, the thought "David Bowie Is" has always been followed by an ellipsis...  It was never a full sentence, just a question that sort of trailed off and I never answered for myself.  Not that I tried, but I couldn’t get a grasp on him—is he a movie star, a musician? Never having listened to his music, or seen Labyrinth as a child (the brink, I think, of Bowie fandom for my generation), Bowie always remained an intimidating enigma to me, whose multiple roles I never delved into further contemplating. Well, that changed Saturday night when I went to the Museum of Contemporary Art.

The exhibit now showing at the MCA uses the phrase “David Bowie Is” as a title.  Though it seems a pretty definitive statement, it is presented without punctuation.  It’s an open-ended invitation to you the museum goer to finish the thought however you'd like, whatever you say is probably right… This, to me, was still a little trepidating.  Having majored in English, I’m pretty attached to my punctuation.  It makes sense that the title wouldn’t have a period, because it wouldn’t be a complete sentence--and because Bowie is still alive.  But then why get a retrospective exhibit? He's not retired, he's not really the sort of artist that would be featured in an art museum.

And, in exploring that idea in the makeup of the artist, many other artists, musicians, authors, are cited.  Prior to seeing this, I expected (correctly) that this retrospective exhibit might echo that of the Alexander McQueen exhibit, “Savage Beauty,” given at the Metropolitan Museum of Art in New York in 2011.  As Bowie is a fashion icon himself, many of his costumes and outfits were displayed at the MCA for “David Bowie Is.”  And indeed, they were dramatically staged as runway mannequins, not unlike those designs of McQueen in “Savage Beauty,” down to the lighting. This worked out though, given the drama of so many of his outfits, and especially given that McQueen himself designed several costumes for Bowie.

Costume was not the only medium on display.  Everything from music videos, to creatively staged motion projection, photographs, journals, notes, and countless other artifacts are on display at the MCA attempting to give a grasp on Bowie's incredible body of work. I had no idea just how influential he was until having seen a preserved tissue of his from a concert in the 1970s. I had no idea just how widely influenced he was until seeing his notes on a copy of a novel he read.

The essential audio tour fit in nicely to this multimedia aspect. Now, if you recall our post about the recent Magritte exhibit at the Art Institute, you know my qualm with audio tours at museums. I hate the invasive ones, and I almost never partake in them myself because I don't like my interpretations or exhibit experience to be guided by a pre-recording. This audio tour, however, was truly stellar. It actually automatically synced up to whatever station of the exhibit you were in (confession: I had more than a little fun stepping from spot to spot just to make sure that the tour’s motion sensors kicked in). Perusing that powder blue Bowie once famously donned, you might overhear soft audio from an interview with Bowie, and then it would kick into “Life on Mars?,” which you would realize was synced up to the music video being projected on a wall nearby, featuring that very suit. There was so much visual and audio stimulation from one moment to the next in this exhibit, but not so that your eyes and ears didn't know where to focus. It all flowed very nicely.

Now having gotten a glimpse at what “David Bowie Is,” I can confidently say that Bowie remains evermore mysterious, though more intriguing than intimidating. He is a movie star, and yet a recording star, and yet an actor, but now after a peek under all of those hats, the multiple roles make more sense.  And this exhibit revealed even more hats that I was not aware of--designer, makeup artist, fashion icon, voracious reader and a pretty talented student of other icons and musicians.  But getting a closer glimpse into his process on all the media and platforms available in this exhibit, it is clear why “David Bowie Is” has no punctuation: because that ending is continually being altered and rewritten and added to.

"David Bowie Is" only here until January 9th, so make sure you catch it before it leaves!


Posted by Museum Explorer at 10:27 AM No comments: