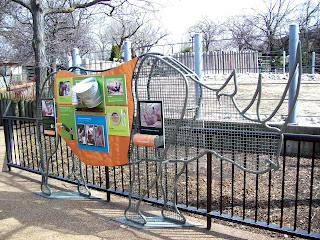 
Oh…ooops…and before we forget! Even though you still can’t reach out and touch the Rhinos directly, we have provided a full sized completely to scale realistic and touchable version of the Rhino for people to enjoy. Now you can get up close in personal with a Rhino from tip of the horn to end of its tail. See our pictures for a sneak peek!
Posted by Museum Explorer at 7:13 PM